Corals are the oldest living organisms in the world and have been able to
skillfully build immense coral reefs over the millennia, creating intricate
marine biotopes. 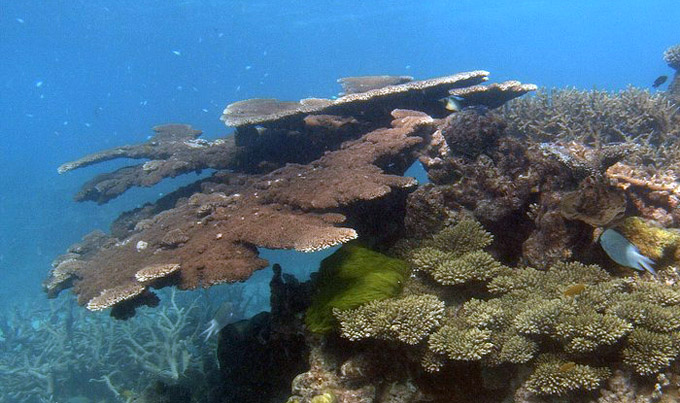 If we were to describe what a coral is to those who do not know its
morphology, we could say that it consists of a colony of genetically equal
polyps living together on the same structure. Thanks to their ability to use
calcium and other carbonates present in seawater and to fix it in their
structure they are able to build, depending on the species, coral formations of
the most varied shapes and sizes. The Great Barrier Reef in Australia is the
most important in the world, with a length of over 2000 km. Coral structures
are called barriers when they are at a certain distance from the coast, and are
separated by the latter through a shallow lagoon. If they are close to the
coast, they take the name of breakers instead. Finally, the atolls, circular
coral reefs built around ancient volcanic islands that have disappeared. The
coral ring separates a shallow inner lagoon (where the volcano once was),
from the surrounding open ocean. The currents then brought sand and
debris, and on these the vegetation began to grow, forming the atolls.
It would be wrong to believe that coral is not able to develop in cold seas.
However, the ones that attract most attention due to their shapes and colors
are undoubtedly those that develop in the tropical bands of the oceans where
temperature is more or less warm throughout the year, guaranteeing greater
quantities of food and water temperature ranging from 22 degrees to 28.
Corals belong to the Anthozoa class and the 2 subclasses belonging to it are
divided according to the number of tentacles of the polyps; they are classified
with the name of Zoantharia (or Hexacorallia) if they have more than eight
tentacles in multiples of six, while they are called Alcyonaria (or Octocorallia)
if provided with 8 tentacles. Thanks to its tentacles the polyp is able to feed
itself, catching zooplankton as in the case of corals of the genus Acropora
and Pocillopora or even small fish and crustaceans as the corals of the genus
Trachyphyllia and Euphyllia do. In reality, however, the coral can provide up
to 90% of its needs through the zooxanthellae, the symbiotic algae that live
on its structure and that to survive depend on sunlight thus forcing the corals
to develop in shallow water.
Other corals that are not in symbiosis with the zooxanthellae and who
therefore want to "hunt" for life can develop in much deeper waters, as in the
Atlantic Ocean where the genus Lophelia is the holder of the depth record
developing to 3000 meters.
Unfortunately, in the past this biodiversity has been repeatedly tested by man,
and only recently has the importance of protecting these beautiful submarine
"gardens" been fully understood. Often they were employed simply for
construction, with the coral blocks molding into the building blocks of coastal
villages which, in order to supply the stock lists of the great exporters of the
aquarium sector, underestimated the impact they could have had on such a

fragile ecosystem. For this reason, a few years ago we tried to sensitize the
inhabitants of places overlooking the coral reefs, especially in Indonesia. We
encouraged them to participate in projects aimed at the construction and
management of a real Coral Farm where from a single original colony you
can create different frags to grow individually to be reintroduced, once grown,
in the most damaged points of the barrier. Thanks to these projects, it is also
possible to meet the great demand for corals from the aquariological market
that finally, thanks to the creation of CITES permits that regulate the market,
allow the private individual to cultivate this hobby without weighing on the
environment.